Our Managing Director Ron Salter shows what a winning company Salters Cartage Ltd is and how he encourages the staff to be winners. 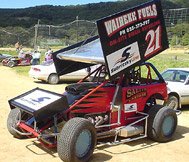 Ron Salter was a leading force in truck racing in New Zealand for over seven years.

Taking a wrecked Mack truck, Salters built a C-Class winning race truck that dominated the truck racing scene until it was written off in a spectacular crash in 1992.

Ron liked the taste of winning, but now he wanted to win outright. So he decided that he and his wife Natalie (Salters’ other Director) would go to Europe and purchase a winning class race truck.

In 1993 New Zealand saw the Volvo ‘White Aero’ arrive in the country. This awesome vehicle, with Ron at the wheel, was the leading racing truck in New Zealand and Australia for the next three years. Ron won four New Zealand titles in a row from 1993 to 1996 and took the coveted Australia title in 1996.

While he was truck racing, Ron also raced a Modified car at the local dirt track on Waiheke Island. Winning three Modified Championships there, at the end of the 2002/2003 season, Ron decided that he wanted a bigger challenge. Salters Cartage now sponsors a sprint car to be raced at Western Springs, driven by Ron.

The new car was built at Race Works, builder of 7-times New Zealand sprint car champion Kerry Jones. Engine Dynamics was then asked to build their dream engine, a new 4.1 litre Chevy dart block with Brodeck 2000 heads. This proved highly successful – delivering over 750 bhp when we put it on the dyno.

With the racing season starting in October, this page will be kept updated on how Ron and the car are doing – showing to the world that Salters Cartage are a winning team.